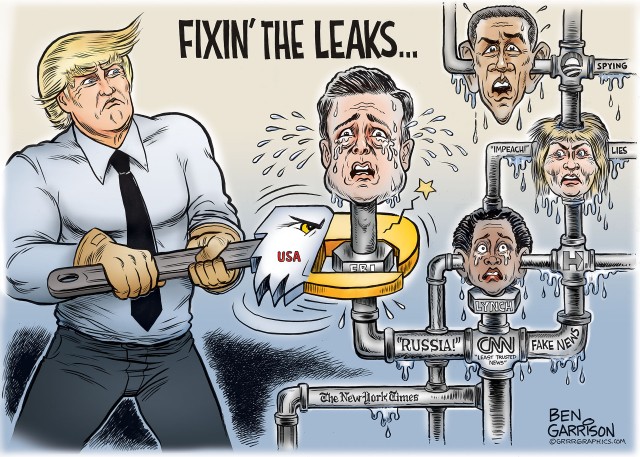 What a pathetic performance by Comey. How in the hell did such a man become an FBI director? Oh, now I remember. He was a clerk for the Deep State all along. His job was to protect the swamp. He was ordered to let Hillary off the hook.

Comey began by helping the Clintons escape Whitewater charges when he was a deputy counsel for a special Senate committee that was investigating the crime. Er, ‘the matter,’ as Comey probably saw it. Comey then went to Lockheed Martin, where he amassed a $6 million fortune before he left in 2010. That’s quite a reward.

He was appointed FBI director by Obama in 2013. Barry must have known that Comey was already compromised and would do the globalists’ bidding. He was right. He let the arch criminal Hillary off the hook again by claiming she had no ‘intent,’ even though she lied about her email and the leaking of classified information from her illegal server. She obstructed justice by destroying evidence. Instead of going after Hillary, he granted her operatives immunity in the investigation, er, ’the matter.’

The hearings revealed Comey to be a weak, lying, wormy mound of quivering jelly. His investigation against Trump for supposedly colluding with Russia? It was all based on lies, hearsay and fake news. Comey admitted there was no evidence, yet he continued to spend taxpayer money on pursuing a case. He said he operated by a ‘gut feeling’ with Trump. In other words, the Deep State ordered him to drum up an investigation based on fake leaks and anonymous sources. Comey himself admitted to leaking information. He also admitted “The New York Times” was publishing fake news. Instead of investigating a real news story such as the murder of Seth Rich by the Deep State, the legacy media were busy concocting lies about Trump and Russia. On orders from the Deep State, of course.

President Trump’s decision to fire Comey was spot on. The first step in draining a swamp is to stop the toxic leaking, lies and corruption that help create one in the first place. The FBI, CIA and NSA should all be answerable to the president, and he should be able to fire anyone in those agencies. We The People should have ultimate control over such bureaus through the elected president. Otherwise, said agencies can go rogue while hiding under ‘national security’ secrecy every time. That’s not right. We The People demand accountability. Otherwise the agencies can aid and abet criminals. You know, people such as Comey who let their shadow government comrades off the hook every time. It’s too bad Trump doesn’t fire the entire NSA outright for illegally spying on the American people, but firing Comey is a good first step.

Trump has been exonerated. Comey, the fake news mainstream media, and the Deep State have been humiliated. The swamp has just been drained slightly, thus opening up a path to bring Hillary to justice. Lock her up!

We as private citizens need to reclaim and fight for our rights as enumerated in our Constitution. It's time to speak out and express our outrage at the growing tyranny of Big Government. That's why we created GrrrGraphics! You can find us on the web at www.grrrgraphics.com Copyright Notice © 2010-2014 Ben Garrison/GrrrGraphics.com All cartoons, illustrations, graphics, and artwork on this site are the exclusive copyrighted works of Ben Garrison. ALL RIGHTS RESERVED. Any unlawful redistribution or reproduction or altered/changed artworks with prior express written authorization of the copyright owner is strictly prohibited. If you download or alter Ben Garrison artwork/photos please consider the risk of costly litigation and attorney’s fees, If you suspect someone is making altered Ben Garrison Cartoons or copying/altering stolen photos, please contact the artist immediately.
View all posts by GrrrGraphics →
This entry was posted in Donald Trump Cartoons, General, Hillary Clinton, Liberty and Freedom, Lying Media, President Trump, Tyranny Watch and tagged ben garrison political cartoons, comey, Comey Hearings, crooked Clintons, Deep State, Drain the Swamp, FBI Director, Fire Comey, President Trump. Bookmark the permalink.

1 Response to Fixin’ The Leaks