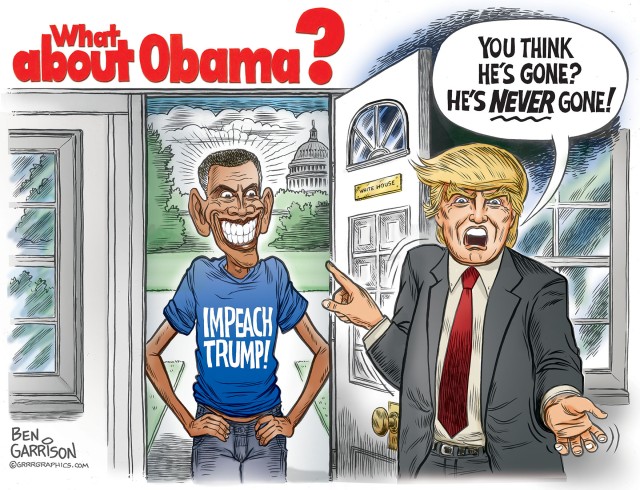 George W. Bush rarely criticized his successor to the presidency, Obama. Unfortunately, Barack is not about to follow that precedent. He is driving very hard to the hoop to destroy Trump. So much so that it almost resembles sedition. Like the Clintons before him, Obama got wealthy in office. He’s also aligned with the billionaire, George Soros, who is eager to help fund Barack’s mischief. Utilizing big money and connections, Obama will try to guide America back on the road toward globalism. Unlike Obama, Trump does not want to be president of the world. He wants to help America first and Obama can’t stand that.

We’ve had enough of Obama. He did his best to destroy America during his two terms. Now he’s directing his energy toward destroying President Trump. Similar to the main character in the film, ‘What About Bob?’ Obama simply won’t go away. Like the Clintons, he can’t give up his addiction to power.
So get ready to endure Obama and Hillary ad nauseam. They refuse to go away. They both deserve to have the America’s door slammed in their smug and entitled faces.
—Ben Garrison
Ben Garrison is an independent political cartoonist from Montana. He has been published in newspapers and online at Zerohedge.com, Breitbart.com, Politico.com, Slate.com and InfoWars.com.

You can become a monthly donor on Patreon for as little as a dollar a month!

Buy a T-shirt and more at the GrrrGraphics TeeSpring Shop

We as private citizens need to reclaim and fight for our rights as enumerated in our Constitution. It's time to speak out and express our outrage at the growing tyranny of Big Government. That's why we created GrrrGraphics! You can find us on the web at www.grrrgraphics.com Copyright Notice © 2010-2014 Ben Garrison/GrrrGraphics.com All cartoons, illustrations, graphics, and artwork on this site are the exclusive copyrighted works of Ben Garrison. ALL RIGHTS RESERVED. Any unlawful redistribution or reproduction or altered/changed artworks with prior express written authorization of the copyright owner is strictly prohibited. If you download or alter Ben Garrison artwork/photos please consider the risk of costly litigation and attorney’s fees, If you suspect someone is making altered Ben Garrison Cartoons or copying/altering stolen photos, please contact the artist immediately.
View all posts by GrrrGraphics →
This entry was posted in Donald Trump Cartoons, Editorial Cartoons, Elections, General, Tyranny Watch and tagged ben garrison, ben garrison political cartoons, Donald Trump, globalism, Obama, Obama for Prison, Obama Lies, President Trump, What about Obama. Bookmark the permalink.

2 Responses to What About Obama?