The TSA’s WAR on TERROR is Terrorizing American Children, Women and Men 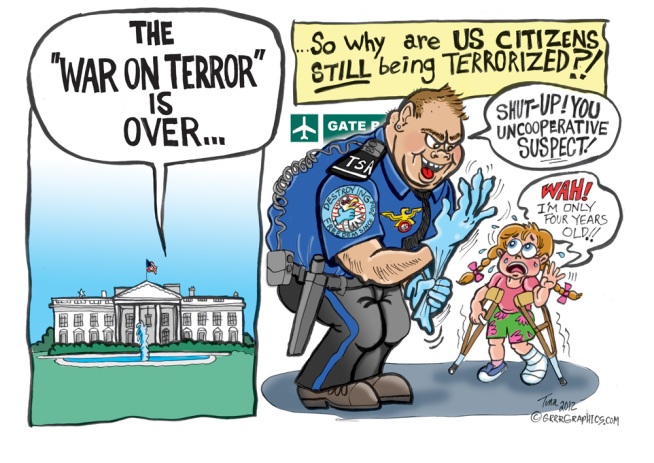 The ‘War on Terror‘ was declared ‘over’ last week, but we now know it’s a permanent operation aimed at the American people. This cartoon, drawn by Tina Norton, illustrates how absurd and pernicious the TSA has become. Molesting frightened little girls is supposed to prevent ‘terror?’ The TSA are the real terrorists. They are performing government terror on citizens. The TSA must stand for “Terrorize the States of America,” or “Testicle Squeezing Assessors,” or even “Troubled Sadists Agency.” This type of job is a magnet for child abusers and perverts. The trouble is, the groping and microwave frying won’t be confined to airports. Obama wants a Civilian Security Force as strong as the military in order to suppress and harass Americans themselves. This means the TSA will be coming to bus and train stations, malls and schools. Random checkpoints with malicious TSA gropers everywhere will be the final nail in the coffin for the 4th Amendment. Add in Big Sis’s tattle-tale spy force and we’ll be no better than East German or the old Soviet Union.

The fear-mongering by big government is part of their game plan to take more rights and liberties away. They create false flag events to speed their agenda along. The TSA groping is meant to condition Americans into accepting the permanent loss of their 4th Amendment rights. The TSA will keep pushing the boundaries until Americans push back. We don’t advocate violence at GrrrGraphics, but we DO believe in our First Amendment right to speak out LOUDLY against their tyranny. All Americans should.

“When the people fear their government, there is tyranny; when the government fears the people, there is liberty.” —Thomas Jefferson

We as private citizens need to reclaim and fight for our rights as enumerated in our Constitution. It's time to speak out and express our outrage at the growing tyranny of Big Government. That's why we created GrrrGraphics! You can find us on the web at www.grrrgraphics.com Copyright Notice © 2010-2014 Ben Garrison/GrrrGraphics.com All cartoons, illustrations, graphics, and artwork on this site are the exclusive copyrighted works of Ben Garrison. ALL RIGHTS RESERVED. Any unlawful redistribution or reproduction or altered/changed artworks with prior express written authorization of the copyright owner is strictly prohibited. If you download or alter Ben Garrison artwork/photos please consider the risk of costly litigation and attorney’s fees, If you suspect someone is making altered Ben Garrison Cartoons or copying/altering stolen photos, please contact the artist immediately.
View all posts by GrrrGraphics →
This entry was posted in Editorial Cartoons, TSA, Tyranny Watch and tagged Barack Obama, freedom, grrrgraphics.com, liberty, Obama, political cartoons, Soviet Union, Take a bite out of tyranny, Thomas Jefferson, Transportation Security Administration, tsa, United State, War on Terror. Bookmark the permalink.

2 Responses to The TSA’s WAR on TERROR is Terrorizing American Children, Women and Men